Even Economists Can’t Defy the Laws of Physics

One of the key ideas in systems thinking is that underpinning the everyday events we see is a structure, while harder to see, drives the behaviour of the system. ‘Structure’, is systems jargon, for the pattern of relationships that create the design of the system, and if we are seeking to improve a system, we begin by trying to understand this design. While I am no expert on infectious disease, there is no doubt that the current measles epidemic is driven by an underlying structure that includes factors such as attitudes towards vaccination, poverty, overcrowded housing, pressure of both parents working, and access to the vaccine. This is not a complete list, of course, and if we wanted to apply systems thinking to understand and respond to the measles outbreak, we would not just add more items to the list, but explore how they interact and reinforce each other. That is, we would want to understand the design of the system that is driving the outbreak we are currently experiencing.

I’m not an economist either, but I want to apply this same thinking to understand why economists think they can defy the laws of physics. The recent G7 meeting, and New Zealand’s domestic politics, highlights that when confronted with the practical steps required to tackle significant issues such as the climate crisis our so-called leaders attack any policy that they perceive is going to jeopardise economic growth. Economic growth is the holy grail which governments around the world, including ours here in New Zealand, persist in chasing. But the laws of physics are aligned against them. The patterns of growth that delivered the phenomenal expansion of goods and services in the 20th Century will not be repeated this Century. Not because our political leaders want to limit growth, but because of the laws of physics. To understand why this is the case, let’s take a system thinkers journey through our economy. However, unlike economists, we’ll take into account the physical laws that govern it.

Despite what economists and politicians might say, the basics of our economy are simple: 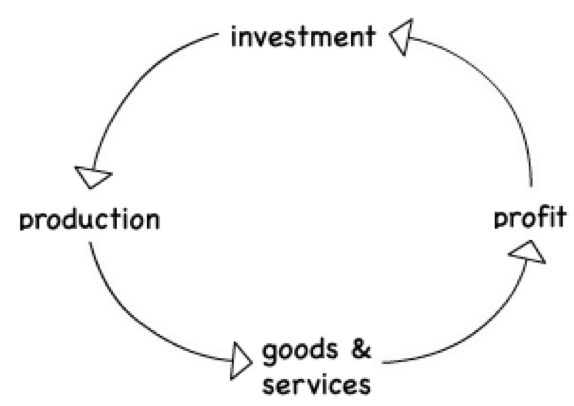 And so it keeps on going around in a simple reinforcing feedback loop, and every day our leaders and the media obsess about the levels of consumer spending, how much investment is taking place, how much profit companies are making. Despite daily fluctuations, the expectations, and hopes are that they continue to grow, generating more consumer spending, more profit, more investment and more production of the stuff they want us to consume. It is this growth cycle that drives our economy. But the diagram begs the question, “what do businesses invest in to keep producing?”. Yes, the investment buys new equipment, additional staff, new technology, but what investment buys is energy. Underpinning all investment is the desire to get more things done, or more of the same things done with higher quality or a lower cost. All of that requires energy. The tractors, the machinery, the computers are merely different ways of extracting that energy to get the task done. In nature, everything runs on energy.

The sun’s rays combine with nutrients, water, and carbon dioxide to grow plants. Animals eat the plants, other animals eat those animals and so on, each stage generating an energy input, an energy payoff, and some waste heat. My son is training for a 50km trail run. He expends (inputs) energy as he goes on his morning run. His payoff is a body that is fitter, faster and more capable of completing 50km. Along the way, his body produces waste heat, and a lot of sweat. This is a basic process that we all conform to, and so does our economy. Businesses combine energy and natural resources with technology and labour to create real things like cars, houses, computers and hamburgers. Although we then rank their values using money, energy remains the foundation of our human ecosystem. As Nathen John Hagens (https://www.linkedin.com/in/nate-hagens-004810b/) points out our economy does not run on money – it runs on energy. Energy is what we spend. Money is just a marker. (https://www.amazon.com/gp/product/1610916107?pf_rd_p=2d1ab404-3b11-4c97-b3db-48081e145e35&pf_rd_r=NRKKBPCM3JMS89DSPQBN)

Historically however, energy was provided by human muscle power supplemented by horses and wind, putting enormous constraints on how much could be produced. 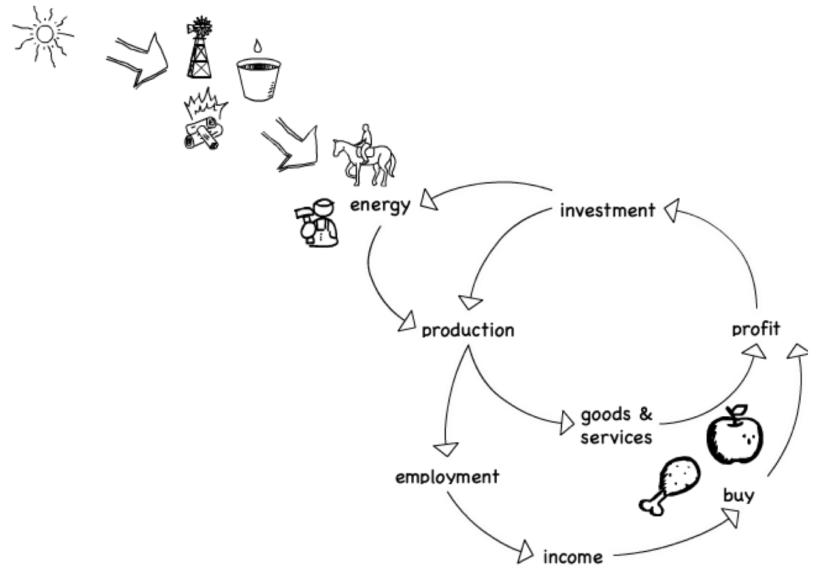 The average manual labourer expends about 0.6 kilowatt-hours (kWh) of work energy per day, the equivalent of leaving a 100 watt light bulb on for 6 hours. For thousands of years, civilisation was built on human muscle power augmented by horses, wind, water and fire. They all utilised solar power and natural systems (soil, forests, rivers, etc.) to generate a surplus for the community and most of that surplus was in the form of food.

Production required land – forests for the charcoal for the furnaces, and arable land to feed the horses. As a result, less and less land, and time, was left to feed people. So, if rulers got a bit carried away trying to build too many pyramids, or fight too many wars, they would run out of energy resources, and their empire would collapse. History is, amongst other things, an ongoing story of the rise and collapse of empires, cities, and rulers, all of whom came up against the limits of energy.

That limitation changed in the late 1700’s when we learnt how to extract and use the earth’s enormous stores of fossil fuels. Coal gave birth to the industrial revolution and society was transformed. Oil accelerated that transformation. One barrel of crude oil contains the equivalent of 1,700 kWh of thermal energy, which is equivalent to more than ten years of manual labour. So, at an average salary of say $35,000, one barrel of oil represents around $350,000 of manual labour. At a cost of approximately $60 a barrel that is not a bad return and is the reason why, over the last 200 or so years, we have continued to replace human muscle power with an increasing number of machines, powered by oil, allowing us to produce more, consume more and continue to invest to keep the economic cycle going around.

Technology has played a significant role in increasing overall energy use in the economy, adding energy to tasks that humans previously did manually (growing crops, writing books, making things) thus increasing productivity and creating a myriad of new energy-hungry gadgets (microwaves, iPhones, etc.). This abundance of energy has driven the growth we have seen for the last 200 years. While the population has grown 5-fold in the period 1850 – 2010, energy use has grown 20-fold and the use of fossil fuels has grown by 150-fold. (https://www.amazon.com/gp/product/1610916107?pf_rd_p=2d1ab404-3b11-4c97-b3db-48081e145e35&pf_rd_r=NRKKBPCM3JMS89DSPQBN) The result is an abundance of stuff, stuff that we measure our progress by, new cars, phones, clothes, gadgets of all kinds.

But all this stuff requires energy and energy conforms to the laws of physics. One statistic that links physics to the economy is the energy return on energy invested (EROI). EROI is a measure of the amount of energy you get from every unit of energy you use to find and recover it, and oil is getting harder to find and a lot more expensive to recover. At its best the EROI for oil was close to 100:1. It is now less than 10:1 and the odds are going to get worse, not better. We used to get $100 of energy for every $1 of energy input, now it’s $10 or less. The days of cheap energy are over. Yes, there will be fluctuations in prices, and techniques like fracking will have a short-term effect in reducing extraction costs but the downward trend will continue. While there is still debate on how it is calculated the EROI for solar comes in at around the same, 10:1. (http://rameznaam.com/2015/06/04/whats-the-eroi-of-solar/)

So we have a problem. We continue to buy stuff, stuff that requires energy to produce. The cost of finding and extracting that energy is rising. Oil companies need over $100 a barrel to cover all their costs, so at around $60 it is no longer profitable (https://www.amazon.com/gp/product/1610916107?pf_rd_p=2d1ab404-3b11-4c97-b3db-48081e145e35&pf_rd_r=NRKKBPCM3JMS89DSPQBN). We also need a lot more than we earn to buy all the stuff we want. The sleight of hand is achieved by borrowing, and all around the world businesses, governments and private individuals are borrowing more and more. 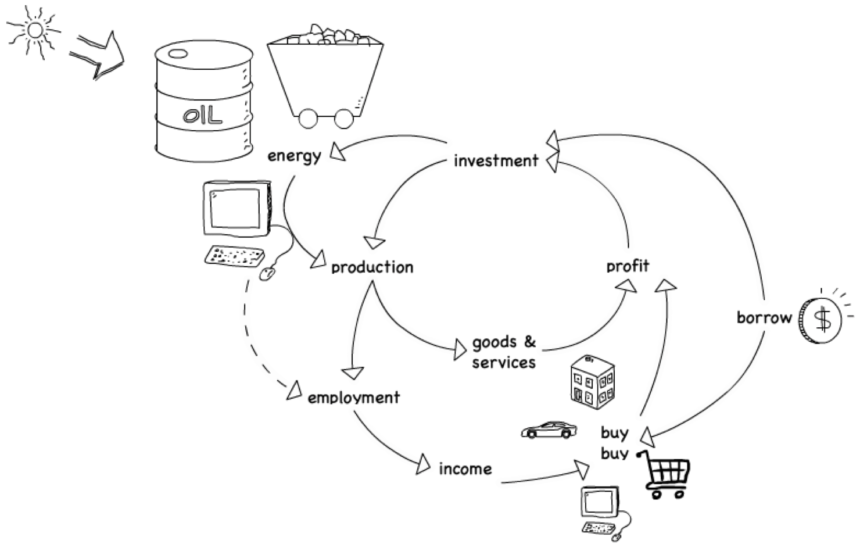 The simple reality is that we cannot afford all the stuff we have, and we can only acquire it by borrowing and creating debt. Remember it is energy that we are spending, the energy required to produce the stuff we buy, and it is taking more and more energy to find and extract the energy used to create that stuff. We have used the energy resources, but it is our children who have the debt. The world debt, as I write this, is currently $72,748,563,054,502 and the interest alone is growing at approximately $10 million every two and a half minutes (https://worlddebtclocks.com)

Our children understand the maths and the physics, and know that nothing can grow forever. They also know that energy is not just an economic input. Energy, when created with fossil fuels, is having disastrous effects on our planet.

So, we have a problem. Businesses can’t afford the increasing price of energy, and we can’t afford the stuff we buy. Our current response is that of the four-year-old, “I want it, and I want it now!” We borrow the money we don’t have to burn the fossil fuels that allow us to create the stuff we don’t need and leave the consequences of that greed for our children to cope with.

The future is going to be different, not only because climate change is going to force it upon us, but also because the cheap energy that drove the growth of the 20th Century is no longer available. Economists still talk about growth, and panic when it slows down, but there is little they can do over the long-term. Physics is far more powerful than economists, and like it or not the future is going to be a future of less stuff.

And our children know it. That is why they are protesting. That is why they are striking for the climate (http://www.schoolstrike4climatenz.com). They are doing what their elders refuse to do. They understand the laws of physics. They understand the science. They know that what we have enjoyed for the last 100 years will not persist into the future and that is why I and my colleagues in Synergia are going to support the real leaders in New Zealand at this point in time, our school children.