With a new ED department and volumes rising much faster that the regional average the Hospital wanted to understand what was driving the increases and was it possible for them to influence them.

We began by developing Reference Behaviour Patterns (RBPs) that described the key patterns that were of concern to the hospital. These RBPs also captured the scope of issues that the project needed to cover.

We then undertook a number of Group Model Building (GMB) sessions to develop an understanding of what was driving ED presentations in the minds of staff working in the hospital. This resulted in four key areas that we explored further. The four areas were:

Characteristics of the ED: it was new, free and wait time was minimal compared with other options
Population characteristics: an increasingly ageing population with chronic complex conditions, resulting a more acute episodes and need for urgent care.
Characteristics of Primary Care: variable levels of trust compared with the high trust in the ED
Access to primary care services: The ED is central and easy to get to whereas primary care is often more difficult to access for those with limited money or transport. The availability of ED after hours was also seen to be a significant factor. 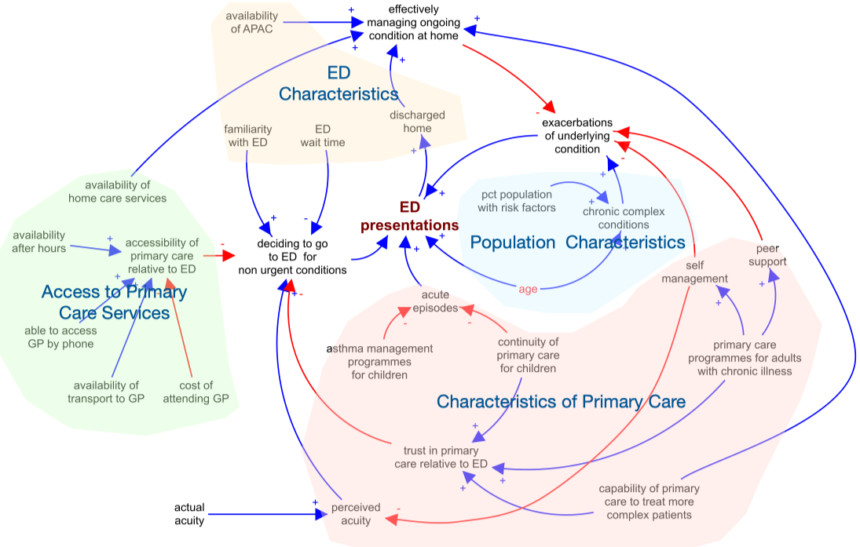 We undertook further research and captured data to understand the dynamics of the drivers in more detail. From this we developed a dynamic simulation model that was designed to run a number of scenarios related to the themes. One of these (see image below) focused on improved management of complex co-morbidities in the community

The model and the scenarios it produced was then used to develop a number of interventions focused on reducing those entering ED who could be better treated in primary care.